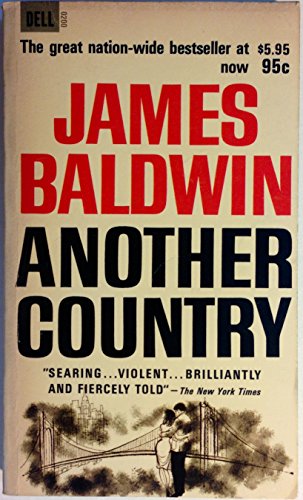 James Baldwin’s “Another Country” is a story about African-Americans searching for a country of their own. Even though this can be taken literally, the larger meaning reflects African-Americans’ inner struggles against racism, nationalism, and sexism. The novel explores lives of a strange social circle: a group of white and black artists. The life of a drummer, Rufus Scott, is short yet complicated, eventually ending in a suicide.

Struggling against his inner racial prejudice and seeing himself as a victim, Rufus abuses his Caucasian girlfriend Leona both physically and emotionally, which eventually leads her to a mental hospital. Rufus’ white friends include Vivaldo, Richard, and his wife Cass. Later in the book, Baldwin reveals some details about Rufus such as the fact that he has a sister, Ida, and that he had a male lover Eric.

Vivaldo and Ida begin interracial affair, and Eric comes back to New York with the intention to renew friendship; however, he ends up creating more drama as his illustrious affair with Cass ends when Richard finds out about it.

Baldwin seems to have filled the novel with an endless line of numerous affairs. Eric, the most notorious of the characters, engages in casual sexual relationship with Vivaldo, and Ida shows affection to Ellis, a producer. It is not accidental that Baldwin showed in his novel many interracial couples and homosexuals, connecting love and race in a time when the two could not be connected because of a taboo.

Baldwin’s characters portray real life struggles African-Americans faced as minorities. They were dominated in every sphere, be it intellectual, physical, social, or political. Their inner combats increased and took the form of such mediums as writing, artistry, and social agendas. Struggling with his black identity, Rufus dominated Leona as a revenge on the whites.

Ironically, his sister once again submitted to the white race through Vivaldo. Furthermore, the homophobic attitudes displayed in the book were a cry out of Baldwin pinpointing that the society was not ready to accept the interracial couples. Ultimately, even though Baldwin opened up the reader’s mind to various sexualities including bisexuals, his characters proved that their love could not survive or be successful.

Perhaps, the most intriguing theme of the novel has to do with the title – “Another Country”. After reading the novel, one understands the reasoning behind it. The characters’ struggles were based on the experiences of those who surrounded James Baldwin. At the time of social inequality based upon race, African-Americans felt as if they did not completely belong to the society.

Faced with alienation, African-Americans were constantly looking for that perfect Utopia which would satisfy their every need. It was the lack of self-satisfaction, negative self-concept, and the failure to find this fantastic Utopia that led Rufus to the only end that could free him: death.

Besides finding a literal place for African-American happiness, the title further hints on the social differences between the United States and the rest of the world in terms of accepting interracial and homosexual relationships. Through his words, directly and slyly between the lines, Baldwin sends the message to the American society saying that it has failed to refuse from ignorant rules which re still embedded in its very blood.

Furthermore, the failures include stereotype thinking when it comes to sex, race, and relationships. It is almost as if Baldwin is making a sarcastic pointer at the whole American society for being basically boringly tied down to old traditions and amulets which outline society’s rules.

It is impossible for the characters to imagine their life without gender and racial problems which will always affect and haunt every single relationship. Baldwin, along with the characters he created, is wishing out loud and in silent murmurs to find a place without any boundaries when it comes to color, sexual preference, or social friendship choices.

Optimistic at first, similarly to his characters, James Baldwin ultimately accepts defeat within his book. There is no bright future for neither of the characters; in fact, their lives are forever foreshadowed by the darkness which comes from this present.

Moreover, Baldwin chooses to ignore many realistic aspects of life living in a fantasy-like world filled with unrealistic goals and efforts. Rufus’ denial and ignorance of real life events lead him to an unrealistic solution.

However, at a closer look, the reader notices that Baldwin has specifically designed his white characters to seem the most unrealistic. This is his way of attacking the white race for being ignorant to the needs and desires of the minorities. In fact, even the Caucasians do not understand their personal needs.

Looking at Vivaldo’s examples, even though he accepts physical relationship with Eric, he still denies his own bisexuality not even understanding his inner self. This denial constantly pinches Eric making him realize that he is not completely honest with himself. However, the society’s unsaid rules and expectations prevent him from acknowledging any such feelings for it is the blacks who share what is inside them and are devoid of making sound judgments. This is the underlined sarcasm which can be detected many times in Baldwin’s words.

In addition, Vivaldo’s denial progresses to the point where he cannot make himself face the reality of being cheated on by Ida. Despite knowing the reality, he goes into deep denial and waits for Ida to confess. This is a broader example of the general white race eager to deny the oppressions and injustices happening even to themselves.

Interestingly, Baldwin chooses a bisexual black man to be the novel’s most authentic and strongest character: Eric. As an ideal of his own mind, Baldwin makes him seem like the true hero not only of the novel but also of the complicated American society.

Eric knows who he is, accepts his choices, and does not agree with everything others utter. However, to be fair to Baldwin, he does display weaknesses of the white race through portraying the realities within his own race. For example, he depicts black boys beating up Richard and Cass’ child. This is to lift the unrealistic veils that keep on falling back on the characters’ eyes. Almost all of the white adults in Rufus’ social circle pretend to not understand why there is racial tension or even that there is any at all.

Portraying the black race as skeptical and harshly realistic, Baldwin makes Ida feel that something is amiss with Vivaldo. Representing the entire African-American race, she does not take love too seriously and has second thoughts about a white man loving her.

It is understandable that white men are attracted to black women; however, Ida is skeptical about Vivaldo’s intentions. Even if he likes her because she is an African-American, this offends Ida internally as she has been trained by the society to think that true love simply for her skin must be a manipulation tainted by impure intentions.

Vivaldo, of course, like the whole white race, refuses to accept this allegation even though Baldwin suggests the opposite. As for the white people interacting with each other, their relationships are not devoid of tension either. For starters, there are tensions among whites concerning their attitudes regarding sexuality and race. The whites who have similar opinions on these issues tend to keep together.

In fact, another type of tension is jealousy for each others’ artistic achievements. Richard and Vivaldo envy each other’s success and, therefore, cannot be truly sincere or united as a race. They fail to understand, like most whites, that their strength lies in being whole-hearted and open towards each other.

Their jealousy extends to such a degree that Richard automatically assumes that it must be Vivaldo, the only other white male in the group with whom his wife is having an affair. Even though Baldwin’s characters are irreplaceable, the novel fails to send a strong overall message to the literary world.

Critically speaking, even though Baldwin presented a black man as the strongest character, it was also another black man, who was the weakest link in the group: Rufus. The analysis started with Rufus and came to an end with the same. He was a white man his life in the darkened façade of the African race.