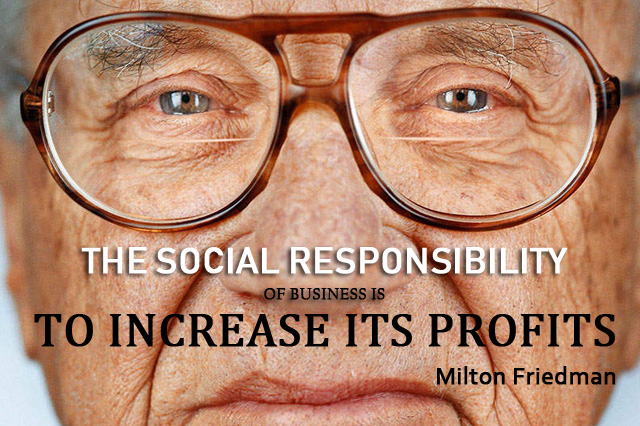 In 1970, Times magazine issued an article “The Social Responsibility of Business Is to Increase Its Profits” written by the eminent economist Milton Friedman, where he argued about the sole goal of business structures. He claims that a basic objective is to generate incomes of the shareholders.

Moreover, the economist maintains the following standpoint: companies that adopted “responsible” attitude could face more obligatory constraints if compared with firms that did not, presenting them less competitive. The foremost economic theorist Milton Friedman claims that the only one responsibility of any company is to raise its profit.

In his article, Friedman asserts that there is no such notion like business’s social responsibility, and only individuals can have responsibility. The economist points out that the sole responsibility of business structures is to engage in activity and effectively use resources designed to raise its incomes. The companies should follow certain rules of the game and engage in a free and open competition without fraud (Friedman, 1970). 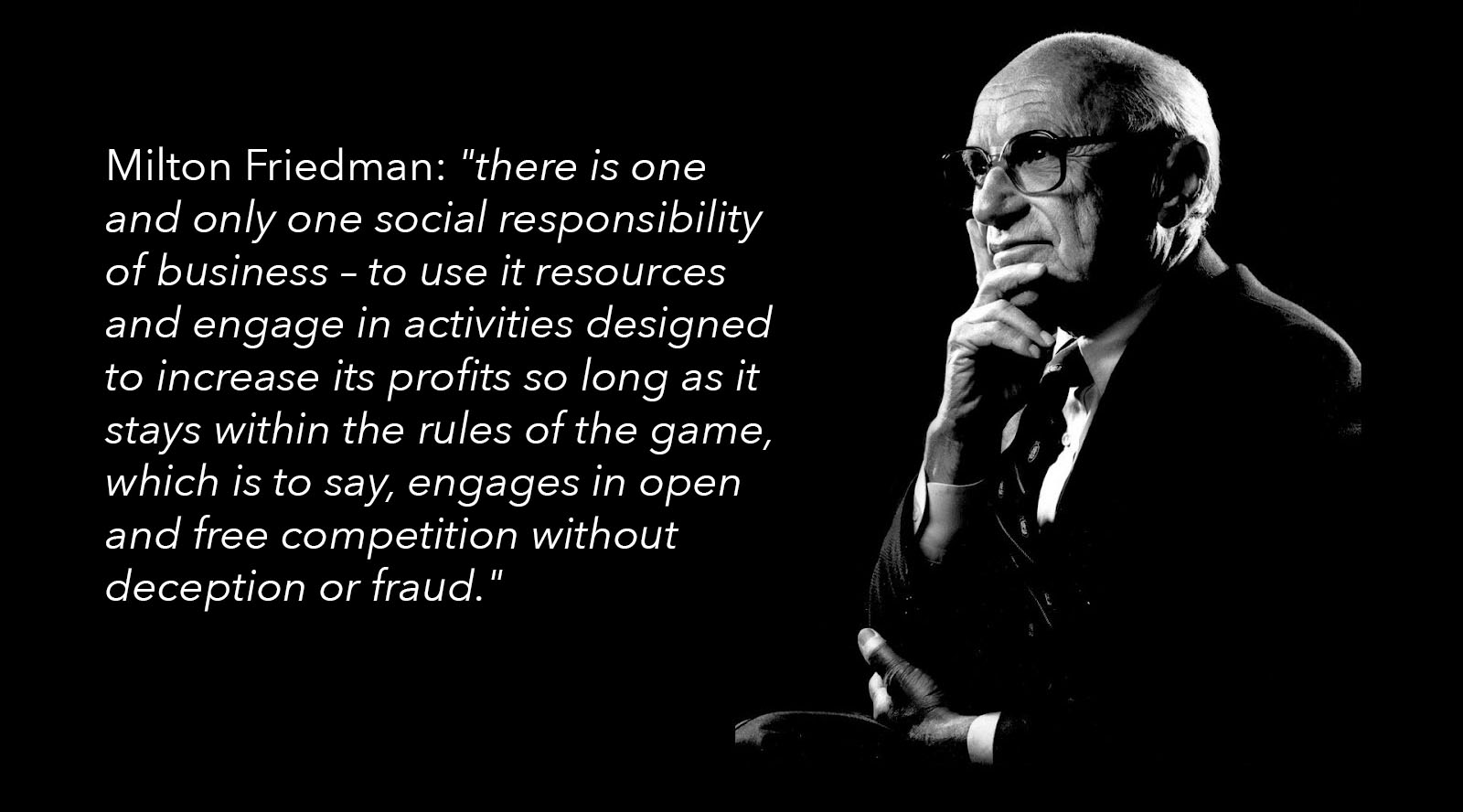 In his important work, Milton Friedman argues that corporations should not concern about social conscience, but simply try to enhance profitability. According to Friedman (1970), the basic initial goal is to get as much money as possible while corresponding to the primary rules of the society.

Both aspects are embodied in ethical customs and laws. The economist claims that any corporate executive has a responsibility to principals, stockholders and workers in order to maintain the highest possible financial consumption while following the law of social morals. However, these managers should not eternalize their personal social agenda with finances of big corporations.

According to Friedman (1970), if a corporate executive starts to encourage avoidance of pollution or elimination of discrimination and other public’s whims, then he/she will deform a free-market economy and promote socialist doctrines. Following Friedman’s standpoint, a corporation is an artificial individual entrusted with artificial responsibilities. A businessperson is an individual responsible for a company or corporation.

From the other side, there are individual holders. Their situation varies since if they diminish profits of the company or corporation for social responsibility, then they use own money, not others’ resources. Friedman (1970) underscores that in a free society, business is responsible to use resources and coordinate activities in open competition with a sole goal: they have to gain as much profit as possible and remain on the market precisely following all the game’s rules.

Nowadays, the majority of companies, corporations, and firms are established to make money and get the highest possible profits in the course of time. No one wants to enter a business structure and lose invested capital. The main differences between firms that are newly established are in terms of profitability, how fast investors will get their invested capital.

The ideal enterprise is one that requires initially low investment since it will return higher incomes in a short period. However, it is easy to say than to do. In real life, new business structures encounter the opposition of many aspects that define their future productivity in the business world.

It is important to note that the business environment is very harsh nowadays, because of large flow of consumers, existing and new competitors, and governmental structures. It is essential for any company to remain competitive by diminishing or eliminating effects of its weaknesses.

Companies have to continue searching for new opportunities in order to differ from their competitors. Any firm should focus only on its strengths and be aware of potential risks. At the same way, investors are ready to risk their capital in the enterprises only if the result is a positive and opportunities are profitable enough.
Owing to the maximization of incomes and allocation of investments, conformation to the principles of society with ethical custom and laws, investors expect corporations and companies to fulfill their financial desires. However, stakeholders may not directly announce about their wish that a company should invest their incomes in the social activity for the public’s welfare.
I assume that Milton Friedman refers to this notion when he claims that social responsibility belongs to ordinary people, not business. If a stakeholder decides that a part of the company’s incomes should be spent on social affairs, then he/she uses own money and eventually get a minor return from investment.

In reality, not everyone shares philosophy of Milton Friedman, even in the business sphere. Stockholder theory offered by the eminent economist is controversial and highly criticized for the following point: the majority of citizens will become impoverished while corporations will continue to make a fortune.

Friedman, M. (1970). The social responsibility of business is to increase its profits. The New York Times. Retrieved from http://www.umich.edu/~thecore/doc/Friedman.pdf